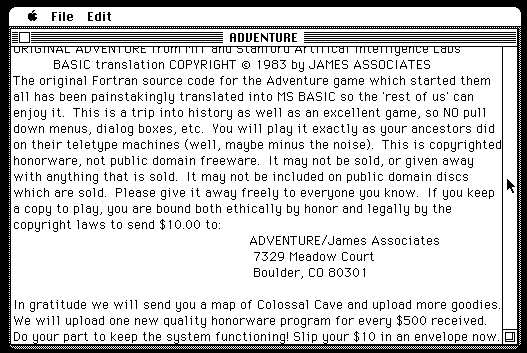 A port of the original Crowther and Woods ADVENTURE program, converted to BASIC by James Associates of Boulder, Colorado. Granted as "Copyrighted Honorware", which apparently indicates the game is only to be given away freely and never sold, and then costs $10 if you play this game.
Description of the original Crowther and Woods ADVENTURE:
Colossal Cave Adventure (also known as ADVENT, Colossal Cave, or Adventure) is a text adventure game, developed originally in 1976, by Will Crowther for the PDP-10 mainframe. The game was expanded upon in 1977, with help from Don Woods, and other programmers created variations on the game and ports to other systems in the following years.
In the game, the player controls a character through simple text commands to explore a cave rumored to be filled with wealth. Players earn predetermined points for acquiring treasure and escaping the cave alive, with the goal to earn the maximum amount of points offered. The concept bore out from Crowther's background as a caving enthusiast, with the game's cave structured loosely around the Mammoth Cave system in Kentucky.
Colossal Cave Adventure is the first known work of interactive fiction and, as the first text adventure game, is considered the precursor for the adventure game genre. Colossal Cave Adventure also contributed towards the role playing and roguelike genres.
Adventure has the player's character explore a mysterious cave that is rumored to be filled with treasure and gold. To explore the cave, the player types in one- or two-word commands to move their character through the cave, interact with objects in the cave, pick up items to put into their inventory, and other actions. The program acts as a narrator, describing to the player what each location in the cave has, the results of certain actions, or if it did not understand the player's commands, asking for the player to retype their actions.